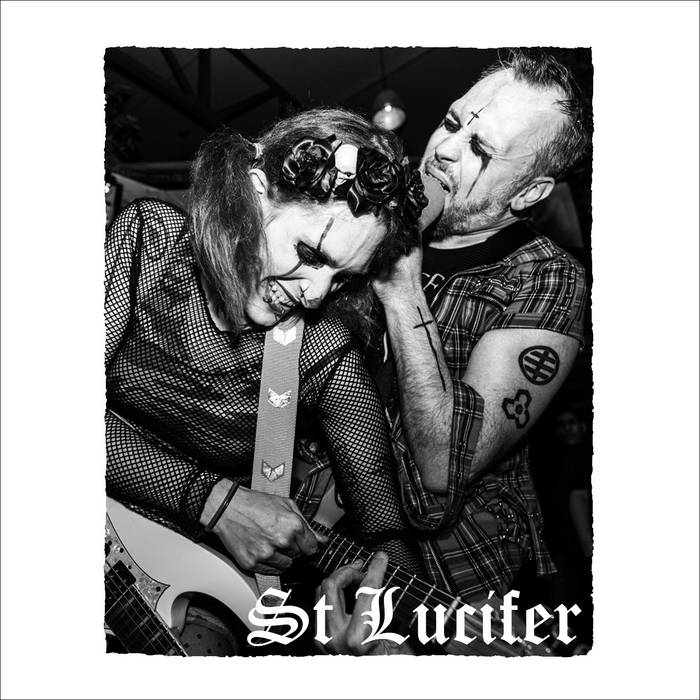 As fierce, flighty and fearsome as ever, St Lucifer are laying the ground for the vinyl arrival of Music is Violence by deconstructing and reimagining some of their favourite tracks on a new EP.

Ultra/Violence features four blistering tracks, with two favourites from the Music is Violence album being torn apart in a frenzy of creativity and passion.

Music is Ultra/Violence is a re-recording of the title track of the album, featuring the new line-up (David - Vocals/Guitar/Synths, Charlotte - Lead Guitar/Vocals, John - Bass/Tech and Alice - Drums/Megaphonics). It’s bigger, brighter, brasher and more brutal than ever, and that’s just Alice’s drumming!

Why do you even Bother? Sees the band take a new and possibly unsettling direction. With its broken electro blues harmonix and David finding new ways to express himself as a lead vocalist. Expect unbridled passion and some unexpected vocal phrasing; with Lottie’s guitar and John’s bass heavily processed and distorted, it ultimately resolves to a killer earworm refrain ‘Yeah Yaz, In An M 3 2 State of Mind’.

Recent Valentine Records signing and guest vocalist on Raise the Dead, Still Forever add unique twist to The Enemy. This reimagining of the track contorts the live favourite into a new dancefloor classic, pounding and powerful with every beat.

It wouldn’t be St Lucifer if there wasn’t a musical curveball somewhere along the line: Kiss Kiss Bang Bang sees symphonic string flourishes give way to a pulsing electro workout. The band say that it’s more ‘techno’ than anything they’ve done since Kill The Robots and just one listen shows why. Lottie intones the title over and over while David plugs an LCD Soundsystem/Soulwax post-clubbing vibe, invoking horror and hypnosis in equal measure.