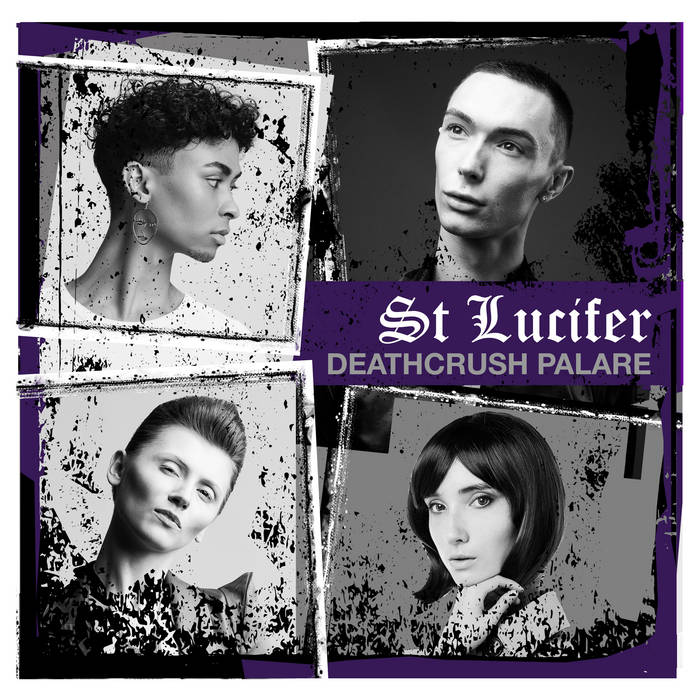 Having given us barely a moment to catch our collective breath following the release of the rightfully lauded Sirens and CSNVA EPs, which have been the recipient of significant global radio play, St Lucifer; those extremely beautiful, talented and Versatile Noisemakers™, are here to gate-crash the summer with the release of their third proper album Deathcrush Palare; an amalgamation of ‘Deathcrush’ as in Mayhem’s debut EP/embryonic Black Metal and ‘Palare’ as in retro-covert gay slang, and unleash the latest evolution of #blackmetalqueerdisco on Joanne Public. Deathcrush Palare is released on 2nd July 2021 via AnalogueTrash.

Album opener Pronouns gives you a two minute thirty eight second shakedown, laden with a massive hook and pounding beat leaving you in no doubt you’re in for an energetic ride over the next thirty-four minutes and ten tracks. As Pronouns fades the scuzz guitar and staccato bass of Razor takes over in a tag-team formation as the music hits you in (almost) three minute rounds, you’re being set up for a submission, rather than a knock-out.

With both having contributed with writing duties on the CSNVA EP, both Amy Griffiths (Still Forever) and Ashleigh Talbot (ded.pixel) once again have co-written tracks with vocalist David Fox for Deathcrush Palare; Griffiths shares responsibility for Pronouns and Backsliding while Talbot shares The Witching Hour. Both tracks confirm their establishment within the band and influence on its current trajectory.

St Lucifer decided that rather than providing some quotes about which track sounds like band X meets band Y on drug Z, they’d provide some reference points for the dear listener about the new album:

There’s much to celebrate here; a band very much enjoying being together, an album which has seen them emerge from all 2020’s nonsense fitter, harder, sassier, sexier and bursting with a desire to get back out and deliver on the road. To catch St Lucifer performing this album live is a must. Deathcrush Palare is available on limited purple vinyl, CD and cassette, as well as on all good digital platforms and streaming services.

Thanks to Jamie, Cosey & Natasha, Lexie, Nadia, Kelly, Eric, all at AnalogueTrash - with special thanks to Adrian Brian Thompson, Mark Buckley, Jo Lowes and Mark (Go to the BAR!) Lawrence, Pastelence, Fourth Engine & Ricardo Autobahn for remixology, The People's Republic of Far Lane (Mohammed: we know where you live!) and last but not least... The Luciferettes