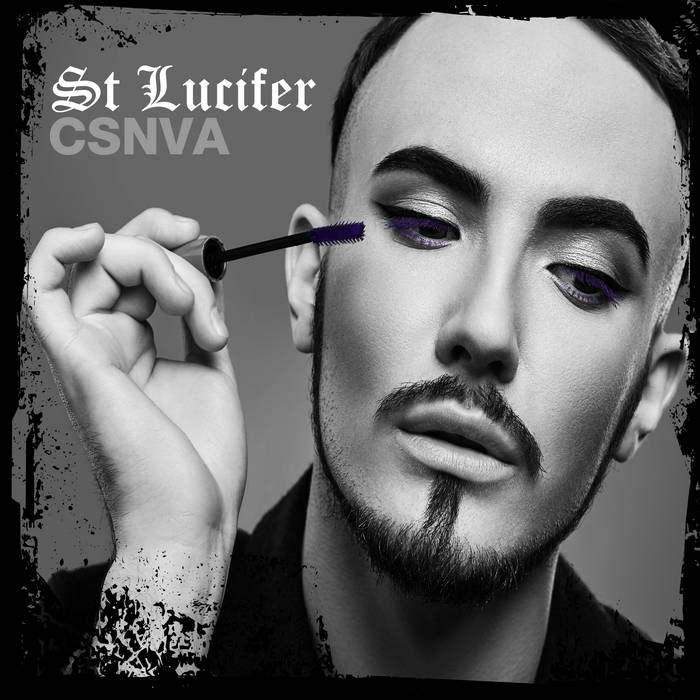 Mark Lawrence A fantastic EP showing St Lucifer going from strength to strength with this new line up. CSNVA is the excellent taster to the new album.

During 2020 St Lucifer weathered a year of social distancing, isolation, and rolling lockdowns by releasing a double album of rarities and remixes, three singles and performing at a spate of virtual gigs - including headline appearances at Trans Pride Brighton and Goth City Leeds. 2021 sees them break ground with their first release of the year, the new four track EP CSNVA released on 7th May 2021, via AnalogueTrash.

The CSNVA EP continues to demonstrate the path of (r)evolution the band adopted with the preceding FutureNoisePsychology EP, kicking off with the (almost) title track Casanova, a bass driven lesson in seduction to welcome you in, instantly recognisable as St Lucifer but still bristling with a sense of newness.

Despite clocking in at a mere 3 minutes 43 seconds it’s got more riffs than a 70s rock compilation, projects Beyoncé-level sass, yet also manages to straddle 80s synth pop (do I hear a Pet Shop Boys hook in there somewhere?), Daft-Punk’s imperial-era electro-rock and an emotive lyric which gives way to call and response phonetics in the chorus (‘No This Is Not Your Life, Repeat, Hit and Run, Gaslight FOREVER’)

This (r)evolution is due in no small part to Ashleigh Talbot’s (also of ded.pixel) presence on bass and Amy Griffiths (AKA Still Forever) providing additional vocals and ‘nefarious pieces of tech’, all of which beautifully complement David Fox’s guitar and vocals and Alice Class’ distinctive drumming.

Screaming in Stages will, when we can once again, have live crowds throwing serious rock shapes, “a massive riff groove explosion! So, so, so many overdubs!” laughs David, “it was very much intended for the Deathcrush Palare album until quite late in the recording process. But, despite being one of our favourites from the sessions it just didn’t quite fit with the flow of the album.”

The tradition of leftfield covers on St Lucifer EP’s is upheld - Shellac’s anti-anthem Prayer to God sees Amy take on lead vocal as part of their ‘ongoing series of covers by different bands that Steve Albini has fronted.’ “This time it’s more visceral electronic rock minimalism and sexy filter synths,” says David (with a typically Luciferian smile), “the end section has all four of us giving it some rather angelic chorus vocals!”

The EP closer Ecstasy Drones represents the first Griffiths/Talbot writing credit for the band, “Alice and I were in the pub!” offers David “We bloody wish!” retorts Alice – given the fact that no one involved has set foot outside their own homes in what feels like aeons.

Ecstasy Drones is not the only first for the band either, “it’s like nothing else we’ve ever done before” suggests Alice – “The first St Lucifer track to date with no guitars whatsoever – and the first to feature Ashleigh on lead vocals.”

The third St Lucifer LP Deathcrush Palare will follow in June 2021 – and having had it on the AnalogueTrash office stereo for several months now, we can comfortably state that this is the quartet’s strongest and most eclectic work to date.

In the meantime, CSNVA is a welcome hors d'oeuvres from a band on top of their game.